Ready Set Maids loves to keep Dallas clean! We are a Texas-based cleaning company that is always ready to bring you the cleaning service that your home deserves using the most advanced materials and cleaning products. Our team members are all professionals that have been carefully hand-picked and screened so that only the best elements in the cleaning industry visit your house, that’s a guarantee! Check out our comprehensive list of services and give us a call, you’ll be 100% satisfied.

The history of Dallas is full of triumphs and failures, of inspiring and tragic anecdotes that have marked the community of Dallas and have made it today’s thriving metropolis. From the discovery of the great East Texas oil field in 1930 to the building of the Dallas–Fort Worth International Airport in 1974, Dallas has been and remains a city that attracts the eyes of the world.

Nowadays, Dallas is the third most populous city in Texas (after Houston and San Antonio), and one of the most important metropolis in the state. It is also ethnically diverse with half of the population being African-America and Hispanic. Dallas is also known for its high concentration of restaurants and shopping centers and its spectacular night panorama of illuminated skyscrapers.

Dallas is a national protagonist in the medical and manufacturing industry, in addition to having prestige in artistic activities such as ballet, opera and musical. Without a doubt, our city of Dallas is a place for success and the good life that fills the country with pride. 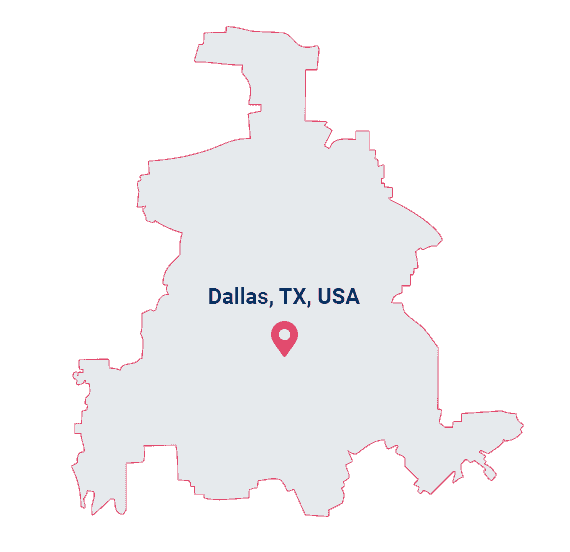 If you can’t decide to hire a full-time maid and don’t have time for DIY cleaning, Ready Set Maids is the option for you. Wherever your home or office has a mess in it, we got you covered with our home/apartment cleaning and office/commercial cleaning services. Moving to another home? Your old house will be good as new with move out/move in cleaning service. Long-time no cleaning? A deep cleaning service is for you. Also, we have eco-friendly options with certified cleaning products. We have something for everyone.

service your home while addressing all of your read more...

As a homeowner or business owner, you have high expectations of how your home and office look. Our home and office are mirrors of ourselves. This is why you need a professional house cleaning and maid service from you most

reliable company the most of their happy customers read more...

Having a home that is clean and sanitized will help you feel better mentally, physically and emotionally. Keeping your home clean regularly make sure that all if being kept in great shape. You will save more money over time with a well-kept home not having

Apartments in the city can tend to be very dusty which can aggravate your lungs. All the people, traffic, construction, and roadways cause lots of pollution cause this dust to accumulate. You will want to be sure that you are staying on top of what you are allowing yourself to read more...

Top Things To Do in Dallas

There’s plenty to do and plenty to see in Dallas. The locals are very lucky to live in a cosmopolitan city full of history and modern life. But, if you’re a tourist passing by and can’t decide where to go first there are  indispensable places that are connected to the heart of the city.

The Sixth Floor Museum at Dealey Plaza, located at the very spot where the president John F. Kennedy was assassinated, and it displays a didactic journey through the life of the president . The Reunion Tower is the city’s 15th tallest building and offers a spectacular view of Dallas.

Also, there are other iconic places that present a natural and impressive side of Dallas. The Dallas Arboretum and Botanical Garden has one of the best pumpkin festivals to visit during the fall, the Dallas World Aquarium safeguards some endangered animal species and exhibits a rainforest, aviary and a big cat dry area. The whole family can enjoy!

Ready Set Maids is proudly a local Sugar Land cleaning company, giving the amazing people of Dallas County the professional service they deserve. We don’t take lightly that you open the doors of your house or office for us. We give the best of our Cleaning Service if you put your trust in us. Always. We have a fantastic professional cleaning team, evaluated and trained, that will exceed your expectations.

Looking for Dependable House Cleaners Near You?

Not only do we conduct criminal and background checks on all our maids, but we also offer a 200% money-back guarantee in all our cleaning services, meaning that if you aren’t satisfied enough we go back to cleaning, and if still, you aren’t that amazed, you’ll receive a refund. Finally, we don’t over-complicate things, book your cleaning service in our online booking platform; no contracts or stress.

We made it convenient for you to book an appointment online anytime, view your pricing and availability and book service with a click of a mouse.

Safer cleaning products which cleans effectively without no harmful fumes for you, your home, your family, pets, and environment. PLUS highly screened and trained house cleaners before they join our team and care for your home.

Our professionals cleaners go above and beyond on every job. Whiles we are not perfect, if you are not 100% happy with your clean, we guarantee to make it right.

Our online communication portal makes it easy for you to log in and stay in touch with us whether you need to make appointment changes, update card info, or even to let us know how we are doing.

We are a credit card only company. We only accept Visa, MasterCard, American Express, and Discover cards. Pay securely online only when your cleaning is complete.

We are fully licensed, bonded and insured for your peace of mind.

A clean house leaves a smile on your face. An office with no mess has less stress. We are proudly the first option of many homeowners when it comes to cleaning services.

The best advertising is a happy customer. We love to read and hear comments from our lovely clients. Every kind word is a reward, and every criticism helps us to grow as a company.

The two ladies really did a fantastic job. They came right on time and finished the deep cleaning of my 3 bedroom house in just 2 hours. The work was well done exceeding my expectation. The crew are very nice and cordial. Ready Set Maids definitely is my Go To cleaning service. They really live up to what all the good reviews I read before I called them.

I had the cleaning service again which was the 3rd experience with Ready Set Maids. Keep it up and you really gave me a wonderful experience again.

This company has outstanding customer service. They have always been accommodating to my requests for changes in appointment daysbor times, and they are quick to respond to my questions.
Excellent! Miss Deinys does a really great job. This time, the master bedroom was unavailable for cleaning since we both work nights and needed to sleep. Once again, Deinys went above and beyond to find 'extra' things to do to help: she reorganized clutter in the spare room and put away a bunch of Tupperware containers that i had just put in a bag and set in the laundry room. And she is always sweet to our cats- usually they hide when people come over but now they come out and greet her 🙂 I am consistently happy with ReadySetMaids. Thank you!

The ladies did a great job. I ordered a deep cleaning and cleaning only specific areas of the house. I used the Yelp deal and booked online. It was so easy! They communicate so well with follow up phone calls and email reminders. They were a little off on the time if arrival because they were behind and I was confused as to when they were going to arrive, but it was no big deal. They worked very hard and left a nice note. I enjoyed having them in my home. I will book again!

We had our house cleaned yesterday and we're extremely impressed by the attention to detail! The cleaning person they sent did an excellent job, including cleaning our window ledges and rugs that we can never seem to properly clean ourselves. We have dogs, and after Ready Set Maids cleaned our house, you could no longer smell them! We're very pleased to have signed up with Ready Set Maids and look forward to our next appointment!

The young lady who cleaned our rental was prompt, very courteous and a hard worker.  The house was filthy and had much dog fur everywhere (3 dogs).  She cleaned the A/C filter, washed the inside windows, cleaned inside of refrigerator, bathrooms sparkled, washed baseboards...  I would definitely employ Ready Set Maids for other cleaning jobs.  I am sorry I did not understand the young lady's name but she was excellent.

Professional. Conscientious. Thorough.  The manager sometimes shows up to make certain that all cleaning is done- but it always is.  If I ever have a question or comment, the cleaning ladies always resolve it quickly.  I recommend this company.

We have learned a lot serving people of Southwestern Houston and its surroundings. There’s a lot more to clean than meets the eye, and you would be surprised how many facts and useful tips you will find in our blog. 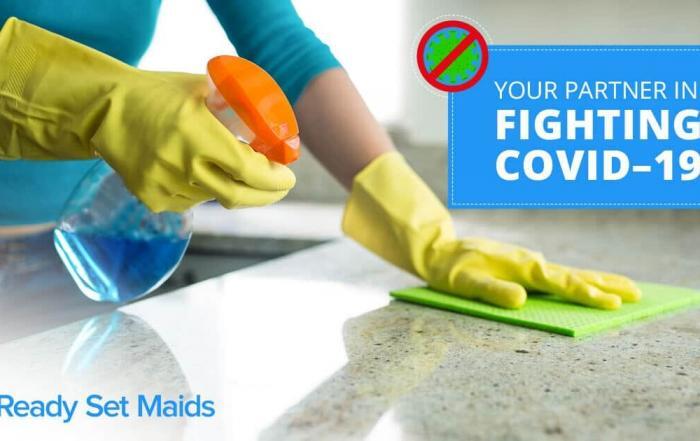 Your Partner in Fighting COVID – 19

You, Your Family & Covid-19 a Quick Guide 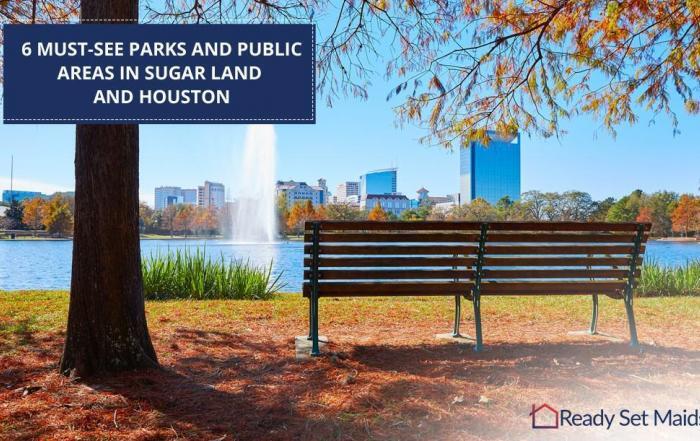 Hiring us will take less time than saying Ready Set Maids! Book with us today and discover how easy is to cross out “cleaning” from your checklist.